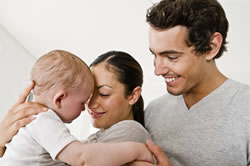 Colic is no fun. If you have any doubt about this, just try living with a colicky baby. But what exactly is colic? At its most basic, colic has been defined as excessive crying or frustration that is unrelated to a diagnosable medical condition. The standard used by many doctors to define "excessive crying" is at least 3 or more hours a day, at least three times a week, for at least three weeks. In reality, though, the crying episodes can be longer and more frequent than this, and the condition can persist for a more extended period of time. Associated symptoms include arching of the back, clenching of fists, and tensing of the abdomen.

Colic affects between 8% and 25% of babies, and not just the babies—it affects their parents as well. Living with a colicky baby has been linked to chronic parental sleep deprivation, depression, and even to thoughts of infanticide. At present, colic has no medically known cause or cure, although some doctors have theorized that the colic symptoms are caused by "tummy troubles" such as gas, indigestion, and bloating. It is this theory that has led to a number of recent studies that may offer some hope to colicky babies and their parents.

The studies tested the use of probiotics in helping balance babies' digestive bacterial flora. Probiotics—one of which is known as lactobacillus—are sometimes referred to as"good bacteria." They are the normal benevolent bacteria naturally found in our digestive system that help us digest food properly, and also help to prevent conditions such as diarrhea and constipation.

In Europe, probiotics are regularly prescribed to adults to treat intestinal disorders. So it makes some sense that the first solid study of probiotics’ use in colicky infants came from researchers at the University of Turin. The 2010 study involved 46 otherwise healthy but colicky infants. About half the infants were given placebo drops as a control, while the other half were given drops containing Lactobacillus reuteri (a known probiotic), mixed with sunflower oil. The researchers then measured the infants’ crying in number of minutes per day over the three-week period of the study. At the end of the study, crying in the group of babies receiving probiotics had fallen from a mean of 370 minutes per day to 35 minutes.

Following up on this study, more research was conducted at Aldo Moro University in Bari, Italy, and the results published in the January 24, 2014 issue of the journal JAMA Pediatrics. In this study, the use of probiotics as a preventive measure was tested by giving over 500 newborns either probiotic drops containing the same Lactobacillus reuteri bacteria or a placebo. The researchers found that the use of probiotics during the first three months of life significantly reduced the number of bouts of colic, acid reflux, and constipation. Babies given the probiotic had an average crying time of 38 minutes per day, compared with 71 minutes for those in the placebo group. The probiotic group also experienced significantly less vomiting and constipation.

The studies’ authors are careful to point out that this research is preliminary and that much more study is needed before probiotic use in infants becomes standard treatment. However, their early findings are hopeful. For the time being, we strongly suggest that parents who are interested in learning more about using probiotics to prevent or treat colic talk with their child’s physician.