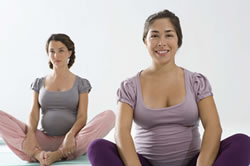 Symphysis pubis dysfunction (SPD), commonly referred to as pelvic pain, is a condition that is growing more common among pregnant women, either due to increasing maternal age or to the condition simply being diagnosed more frequently.  The pain is due to excessive movement of the bones that make up the pubic symphysis, which are the two bones that meet at the front of the pelvic girdle and are connected by a joint made of cartilage and supported by ligaments.

During pregnancy, a woman’s body secretes increased amounts of the hormone relaxin, which makes cartilage, ligaments and other soft tissues more flexible in preparation for childbirth.  There is normally a 4-5 mm gap between the bones of the pubic symphysis.  However, that space can increase another 2-3 mm during pregnancy, often causing both pelvic pain and pain in the lower back and sacroiliac.  Over 30 percent of women are reported as suffering from some form of SPD during pregnancy, with approximately 7 percent continuing to experience pain post-partum.

Symptoms of SPD include shooting pain in the pubic symphysis area (which often radiates to the abdomen, lower back and upper leg), pain on movement, a waddling gait and swelling in the pubic area.  The pain can range from mild to debilitating, and the condition can interfere with normal daily activities such as bending, lifting the leg and getting up from a chair.

A recent study published in The Journal of the Canadian Chiropractic Association has reported that conservative chiropractic care can reduce pain from pregnancy-related SPD, increase mobility and improve function.

Dr. Emily R. Howell of Ashbridge’s Health Center in Toronto studied two cases of women at 30 weeks of pregnancy (35 and 33 years of age) who reported severe SPD (including pain in the lower back and sacroiliac, respectively) and who received conservative chiropractic management.  Treatment included sacroililac adjustments, instrument-assisted adjustments to the pubic symphysis, pelvic blocks, use of a pregnancy support belt and soft tissue therapy.  Both patients were also given tips and exercises they could perform at home, which included stretches, pelvic floor exercises, using a pillow between the knees during sleep and getting up and moving around periodically.  Post-partum exercises were suggested to help restore muscular strength, improve control and encourage pelvic stability.

Both women reported relief from chiropractic treatment during their pregnancy and the tips they used at home.  Long-term follow-up evaluation post-partum found that the patient with SPD and low back pain had no more pain from SPD, with some low back pain related to a subsequent knee injury.  The second woman reported being nearly pain-free, apart from a rare re-occurrence of some mild pelvic pain.

Chiropractic care is a safe and effective treatment option for dealing with pelvic pain during pregnancy that is drug-free and has been proven to reduce symptoms and improve quality of life both during and after pregnancy.